There are places like that on Earth. Places not much fashionable, not really visible in a world of mass media. Hidden or forgotten, if not denied places, apparently! First we’re thinking of rural areas – apart from some fashionable villages offering unique sceneries and enjoying the buzz around famous visitors: movie stars, singers and business moguls. But then what about our urban world? Our modern world is mostly made of not much glamourous towns. Places that may be – however – so great to live in! No matter their lack of brand image. Who cares about notoriety and stereotypes when it comes to daily quality of life? Who cares about geographical marketing when it comes to the subtle combination of residential havens and great green patches? And it’s de facto very hard to depict!

Wroclaw, formerly known as Breslau, is part of those places. Wroclawians themselves don’t show off nor witness much about their city’s assets. In Wroclaw, as in other polish urbanized areas, there is still a complex of inferiority in the air. The only potential source of pride is probably something to do with higher security than in the West. Now consider contemporary Wroclaw, that welcomed the Euro 2012 and became the European Capital of Culture. Something to be proud of, isn’t it? However, it’s far from mainstream events that one can really enjoy Wroclaw!

After almost 5 years living in Wroclaw and discovering its charm, no doubt that we will miss it! On the one hand, a bike ride could so quickly transport us to wild spaces in the outskirts. On the other end, it’s more and more comfortable to get to the city center without the need of a car. Curious visitors, daring to escape the City center, would immediately wonder how is it still possible, nowadays, to find human constructions and Mother Nature so deeply entwined! Wroclaw beats up most European cities when it comes to the number of green patches.

Beyond ordinary parks at four corners of Lower Silesian’s capital, it boasts hectares of green river banks, quiet canals and huge shared gardens. And everywhere, trees that seem to still grow widely despite the concrete and the asphalt, making the city look just lighter and more breathable. A lower urban density and special trees protection laws…here we go! Wroclaw even contains five « Natura 2000 » hotspots of biodiversity.

Beyond the city itself, how to summarize these five years abroad? Wroclaw really deserves its motto: « the meeting place ». And luckily we managed to meet both locals and foreigners. Not only crossing their ways, but actually by getting to know them, their own personal story and a bit of their culture! Thank you children for giving us the key to great people from Japan, from Ukraine, from Uzbekistan and from Germany, from Turkey and Poland, Russia and South Korea, Bulgaria and Greece. Not to forget Sweden, Spain and more…

How could we reach that much cultural diversity if we had stayed home? That hardly could have happened. Why? Simply because when you stay home, you never feel the emergency to shake your habits and move towards foreigners. Because you’re stuck within your comfort zone. And despite the cultural diversity you may encounter at the workplace, on free time you just tend to meet your relatives and old good friends. Voilà. And there’s nothing wrong about it by the way!! But as you move abroad, then either you fall down (and it’s maybe wiser considering a quick flight back) and remain buried by the unknown, or you start wandering around and here we go…you may eventually end up, as a few gold prospectors before, with lots of business and good vibes. 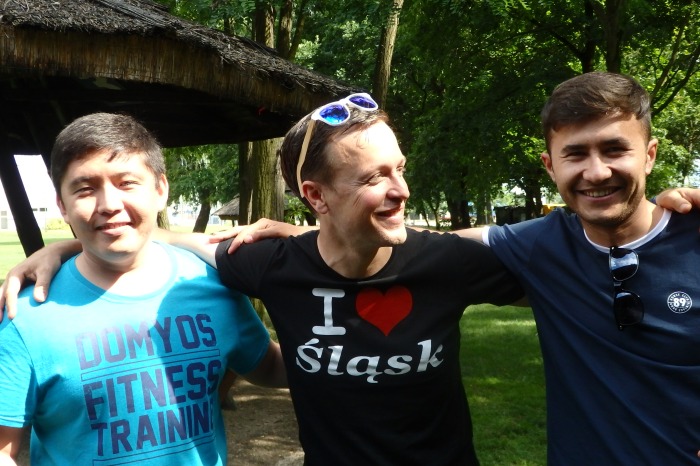 Thank you Wroclaw for offering us so much! You can all count on us to come back again and again 😉